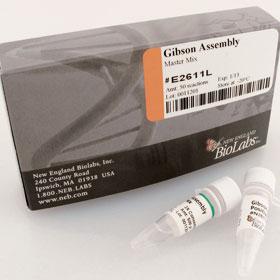 It allows for successful assembly of multiple DNA fragments, regardless of fragment length or end compatibility. It has been rapidly adopted by the synthetic biology community due to its ease-of-use, flexibility and suitability for large DNA constructs. Gibson Assembly efficiently joins multiple overlapping DNA fragments in a single-tube isothermal reaction. The Gibson Assembly Master Mix includes three different enzymatic activities that perform in a single buffer: 1) The exonuclease creates single-stranded 3´ overhangs that facilitate the annealing of fragments that share complementarity at one end (overlap region). 2) The polymerase fills in gaps within each annealed fragment. 3) The DNA ligase seals nicks in the assembled DNA. The end result is a double-stranded fully sealed DNA molecule that can serve as template for PCR, RCA or a variety of other molecular biology applications, including direct transformation. The method has been successfully used by Gibson’s group and others to assemble oligonucleotides, DNA with varied overlaps (15–80 bp) and fragments hundreds of kilobases long.

Daniel Gibson and his colleagues at the J. Craig Venter Institute and licensed to NEB by Synthetic Genomics, Inc.